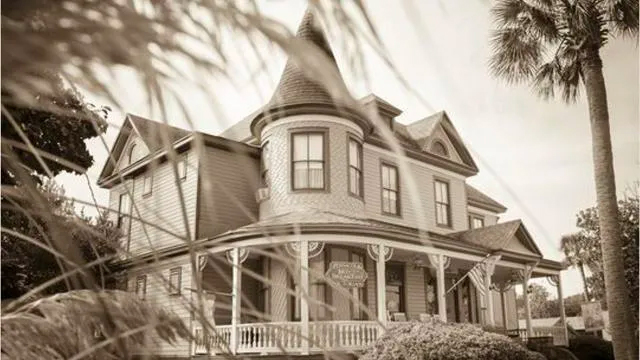 Pensacola…the richness of its history is unbounded, and, thus, the topics on which one could write are seemingly endless. In the spirit of the time of the year, I turn my attention to the holiday that helps to keep many a candy company in business—Halloween. As jack-o’-lanterns, witches, and black cats begin making their yearly appearances, the spooky occasion brings with it gangs of excited, costume-clad children roaming the neighborhoods in a sugar-fueled search for their candy loot. (Eh, please, no Tootsie Rolls. Thanks.) And, in historic Pensacola, these ghoulish escapades are accompanied by countless ghost stories! Admittedly, I have never really considered myself to be a part of the ghost-believing crowd; nevertheless, I find the ghost stories with historical roots to be quite fascinating. I’d like to share with you one of my favorites…

Historic Sacred Heart Hospital – Opened in 1915, this large Gothic Revival building served as the first Catholic hospital in Florida. Although hospital operations ceased many years ago, today, historic Sacred Heart Hospital (now called “Tower East”) houses a theater company and several restaurants, including O’Zone Pizza. However, Tower East is not your typical place of business; some believe that theater goers and restaurant patrons are not alone. Indeed, several witnesses attest to seeing ghostly figures adorned in old nurse’s uniforms sauntering down the halls of the massive, history-laden building. And here’s a fun fact—if you’re ever out and about and decide to have a slice and a beer at O’Zone, there are rumors that suggest the old Sacred Heart Hospital morgue was, at one time, located right where you’re dining. Yikes! But, hey, who am I kidding? Have you had a slice of O’Zone pizza? It’s delicious! …I’m cool with dining in a morgue…

This is but one of countless spooky tales of ghostly apparitions or paranormal activity in a Pensacola historical site. As Halloween rapidly approaches, consider taking part in one of the many Haunted House Walking and Trolley Tours in historic Downtown Pensacola.

Join us as we haunt Historic Pensacola on Friday and Saturday, October 19, 25, and 26. There are three walking tour routes to choose from at 7, 7:30, 8, and 8:30 each night including the Adults Only Redlight Walking Tour, the Murder and Mayhem Walking Tour and the Seville Spirits Walking Tour. The Trolley of the Doomed tour explores the ghost stories of North Hill. The trolley tour is at 6:30, 7:30, and 8:30 each night.  Costumed guides lead you through the ghost stories of downtown Pensacola on an hour tour of over 450 years of Pensacola’s haunted history.

To learn more or to purchase your tickets, visit that web page — http://www.historicpensacola.org/plan-your-visit/haunted-house-walking-and-trolley-tours/ 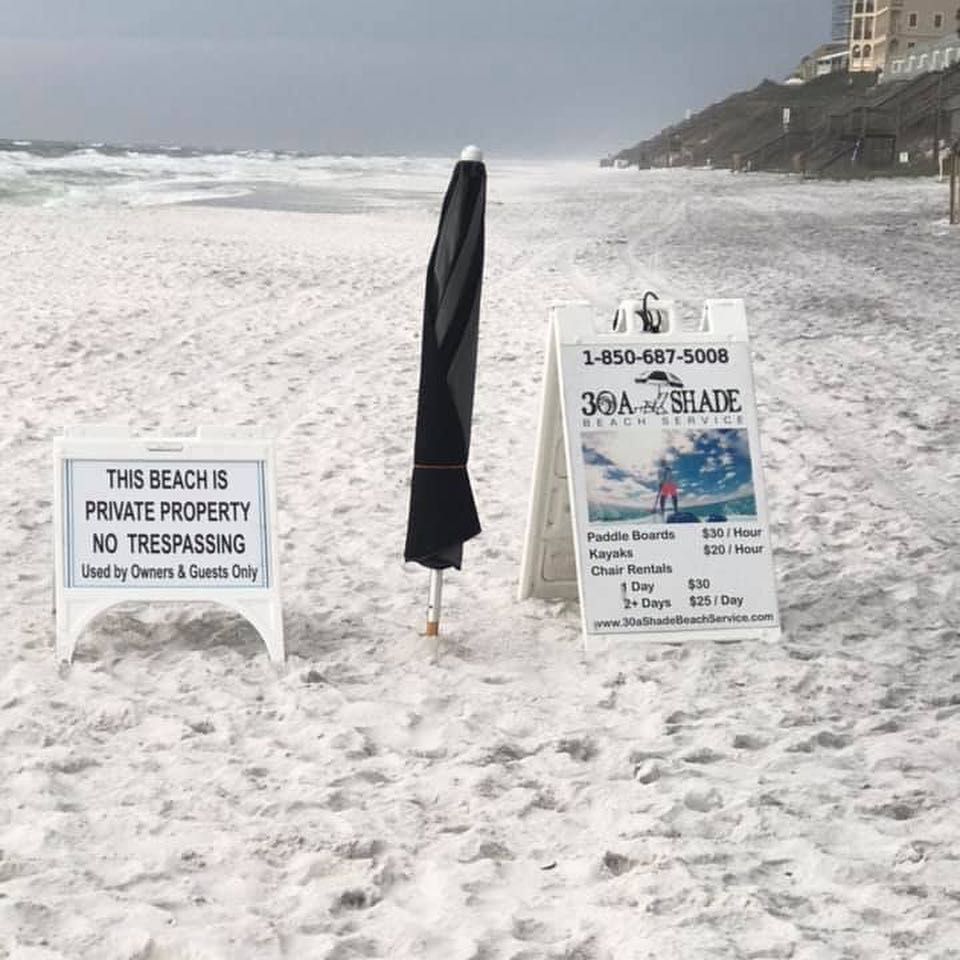 As Pensacolians, we have a lot to be proud of. We have a fascinating, rich, and long-lasting history. The 1559 settlement attempts of Don Tristan de Luna y Arrellano put Pensacola on the map as the oldest attempted settlement in what is now the United States. We are the City of Five Flags. We are the Cradle of Naval Aviation. In addition to our history, we have some of the country’s most beautiful beaches. Indeed, the beaches of Pensacola and surrounding areas are awe-inspiring to locals and tourists alike. But controversy looms…

In the 1950s, in an effort to promote revenue from tourism, Escambia County decided to develop Pensacola Beach. Since the land could not be sold, the county established the Santa Rosa Island Authority to oversee a series of 99-year lease agreements. Advertisements encouraging people to populate Pensacola Beach appeared in newspapers. The sales pitch? No property taxes! Since the property was not privately owned—rather, it was leased by the county—people could build on the beach tax-free.

As a result, heavy development ensued for decades, but in the 1980s, Escambia County began levying property taxes on the leased beach properties as a source of tax revenue. As one could imagine, people were not happy. Arguing that they should not have to pay property taxes on leased land, leaseholders filed lawsuit after lawsuit, many of which are still in contention today. Escambia County justifies its actions by maintaining that 99-year lease agreements are tantamount to land ownership deeds.

Since Pensacola Beach and Navarre Beach are public-owned—Escambia County remains the sole landowner—unlike other beaches in Florida, waterfront access is largely unrestricted. Beach patrons are not thwarted from their sunny weekend ventures by gated beach entrances or “No Trespassing” signs.

In 2017, U.S. Rep. Matt Gaetz, R-Fort Walton Beach proposed a bill that would effectively undo the land lease stipulations of the 1946 agreement. The bill, which would allow Pensacola Beach and Navarre Beach leaseholders to take ownership of their land, was endorsed by the House Committee on Natural Resources.

Gaetz’s bill has bipartisan support of Florida senators, including Republican Marco Rubio and Democrat Bill Nelson. If the Senate approves the bill, leaseholders would be permitted to exchange their 99-year leases for property deeds, reflecting ownership of the land. It would also effectively give local county governments control of development on these beach lands.

The Santa Rosa Island Authority fears that such legislation would primarily benefit big land developers and lead to high-rise condos inundating beach properties. Supporters of the legislation, conversely, argue that preservation land will be protected from such large-scale development. The most recent court decision indicates that taxes could be levied on certain beach properties, depending on the wording of their lease agreements. The right to tax, the court maintains, hinges on whether the lease renews automatically at the end of its term or if negotiations would be in order.

So, what lies in store for our beaches? Will the status quo be maintained? Will leaseholders become landowners? Will local citizens and tourists continue enjoying easy access to our beaches, or will we begin seeing the dreaded “No Trespassing” signs? Only time will tell. In the meantime, summer is right around the corner, so get out there and enjoy it! But remember, do yourself a favor—leave early. The traffic can be a nightmare! 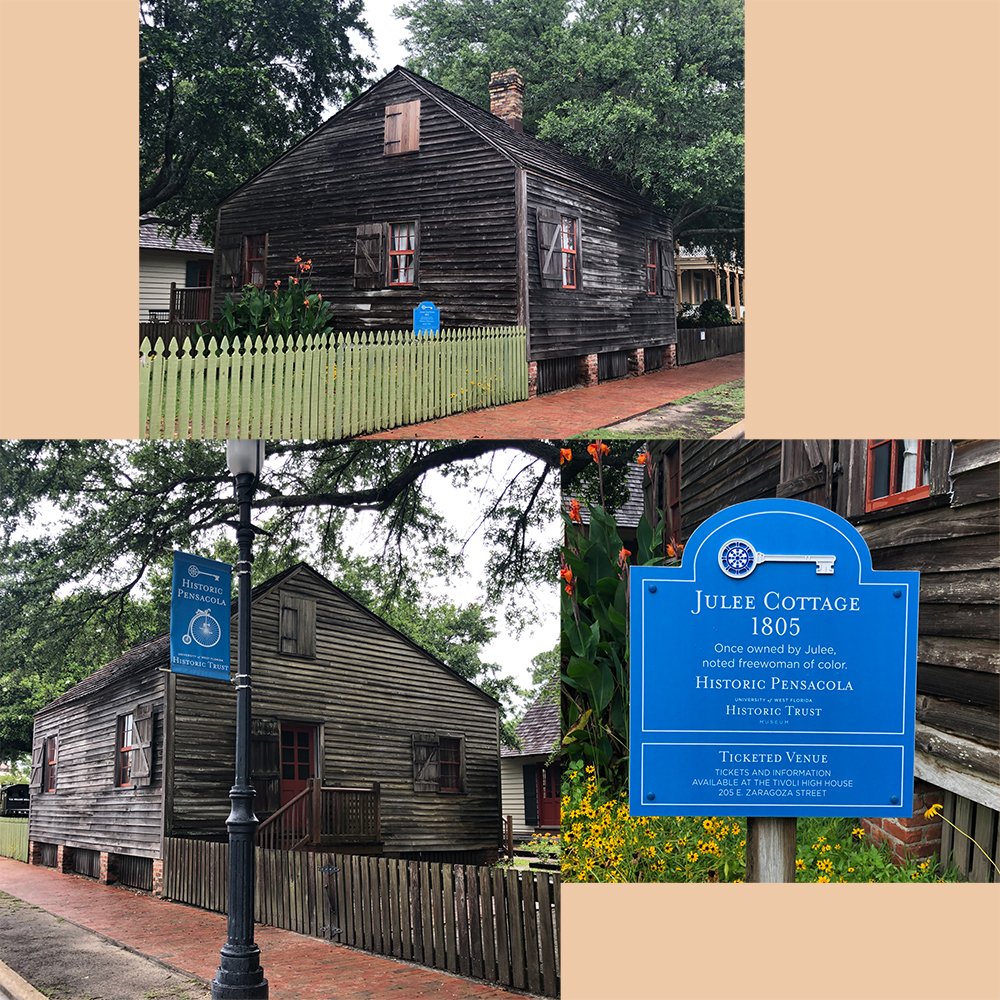 Many a mile I have walked, traversing the streets of historic Downtown Pensacola. Like an aficionado of fine art sauntering down exhibit aisles, curiosity piqued, eagerly anticipating the next great work to marvel, I gazed upon historic building after historic building in wonder of the fascinating stories they could tell.

My fervor for historic architecture began when I was an undergraduate student at the University of West Florida. I was a history, philosophy, and art history triple major; I loved it all. While completing an historic architecture-related project for an art history course, I took to the streets of Downtown Pensacola having never explored the area before, despite the fact that I was born and raised in North Santa Rosa County. Long story short, those streets became my stomping ground.

Then, one day, I happened upon a real beauty, positioned starkly close to the sidewalk on which I strolled. I don’t know what it is about the Julee Cottage, but something just draws me to it–history aside, I just love the building. Quaint. Humble. Pleasant. Picturesque. These are all descriptors my mind conjures while gazing upon this magnificent structure. Offset only slightly from the charming brick sidewalk, this delightful saltbox-style cottage is only made more appealing by its gorgeous landscaping. I could drone on and on about its aesthetic appeal; nevertheless, as the old adage goes, “a picture is worth a thousand words.”

Then, there’s the history, and in this realm, the Julee Cottage reigns supreme. Constructed between 1790 and 1808, most historical records indicate it was most likely raised between 1804 and 1808. It was around this time that Julee Panton, a “free woman of color,” purchased this cottage and myriad other properties in the area. Anecdotal accounts bedded in Pensacola traditional folklore suggest Julee, despite being a “free woman of color,” actually purchased slaves herself. But, why? Thankfully, Julee’s intentions for making such transactions were virtuous. It’s believed that Julee purchased slaves, allowed them to work for others to earn money to repay their debt, and then set them free!

I just love stories like these, and learning more and more about the rich history of the Julee Cottage only made me grow fonder of the darling structure. Today, the Julee Cottage is quite active, serving as one of many unique and interesting components of historic Downtown Pensacola’s self-guided tours. I encourage you to visit the Julee Cottage for a glimpse into the life of a working-class, African-American family during a fascinating time period in American history–Reconstruction. Tickets and additional information are available at the Tivoli High House, located directly across the street from the Julee Cottage, at 205 E. Zaragoza Street.