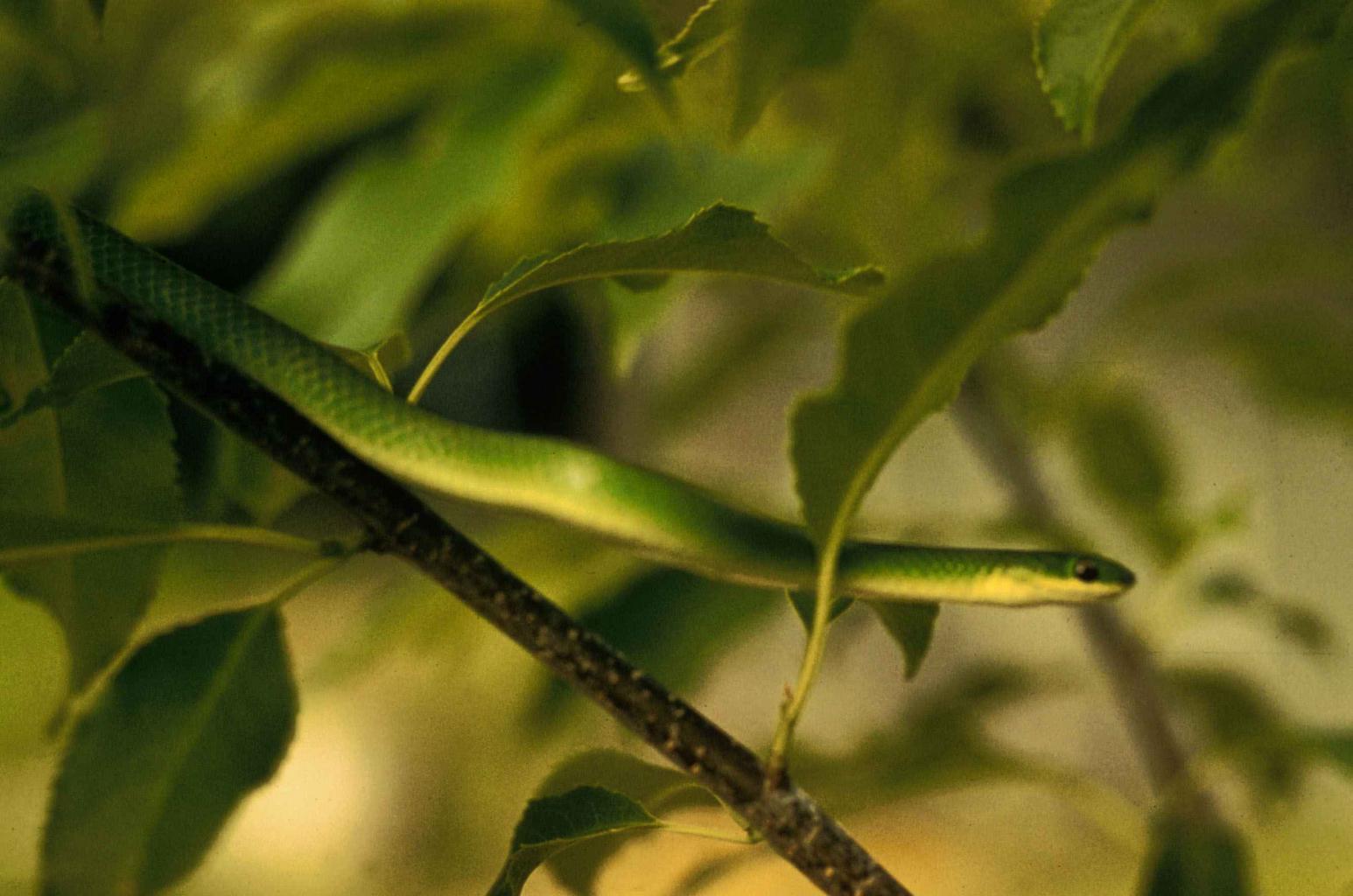 Of the 44 species of snakes in Florida, 38 of them are non-venomous and usually relatively small. If you see a large snake you don’t recognize as non-venomous, don’t dismiss it as non-harmless, and be sure to exercise caution whenever you interact with snakes of any species. Being aware of the kind of snakes you are likely to encounter is important, and these are 10 non-venomous species that you should try to learn to recognize, if possible.

The particular species of this snake that is found in Florida is the Rough Green Snake, named for its keeled dorsal scales. These slender snakes are very common in the Southeast United States and spend most of their time in the trees of moist meadows and woods, though they can also be found on the ground and in other low-hanging vegetation.

Like most smaller snakes, they are almost completely harmless to humans, though they can still bite if sufficiently threatened. They are easily exploited as pets due to their weakness and abundance, and will sometimes be sold for only a few dollars at a time.

These snakes are extremely thin and can grow up to 45.75 inches in length. They are bright green with yellow underbellies, making them extremely difficult to spot when they are hiding surrounded by leaves. 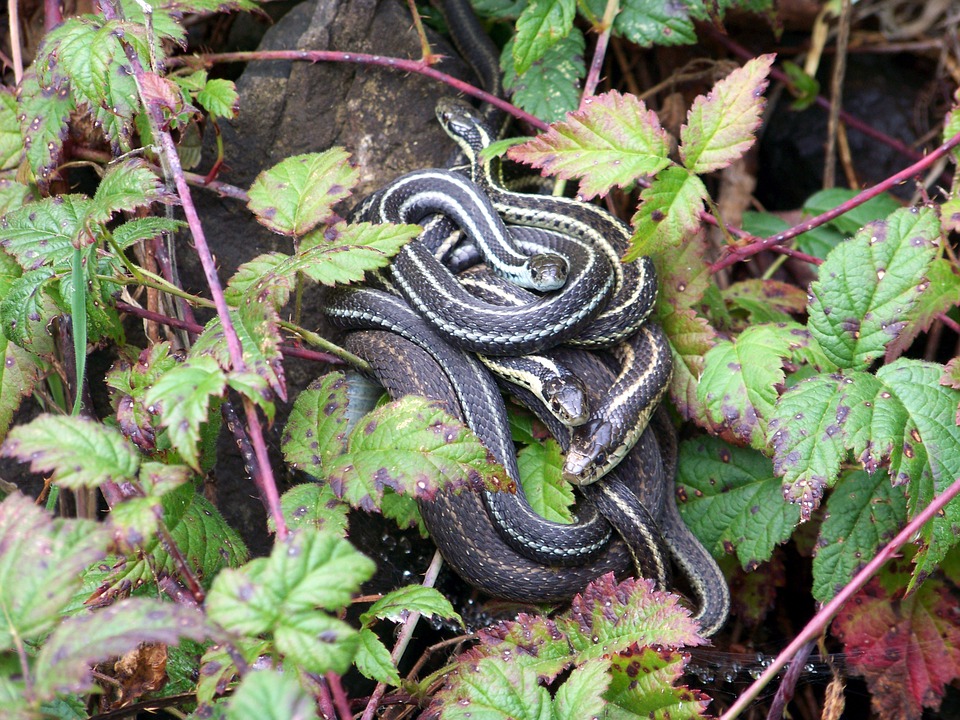 These small, harmless snakes are very commonly found all over the United States, most often in any sort of area near water, such as forests, fields, prairies, wetlands, marshes, and ponds. The Blue-Striped Variant that lives in Florida is no different, though it is very striking compared to some other subspecies.

These snakes have a wide variety of body responses to threats. These vary depending on the type of threat, the temperature, where they are attacked, and the individual temperament of the snake. They are not normally aggressive to humans unless attacked, and even then, may prefer to flee instead of strike. Several garter snake species are technically venomous, but their venom is intended to kill their prey of small frogs and amphibians, not larger animals like humans. Their bites are painful, but their venom isn’t dangerous at all to humans, though it may make the bite sting more than it would if the bite was dry or non-venomous.

Garter Snakes are very small and thin. They are usually between 22-54 inches long and usually stay small. Most species are darkly colored with light-colored stripes down their backs, usually yellow, green, brown, white, or blue, such as the striking blue as the Blue-Striped Garter Snakes found in Florida. 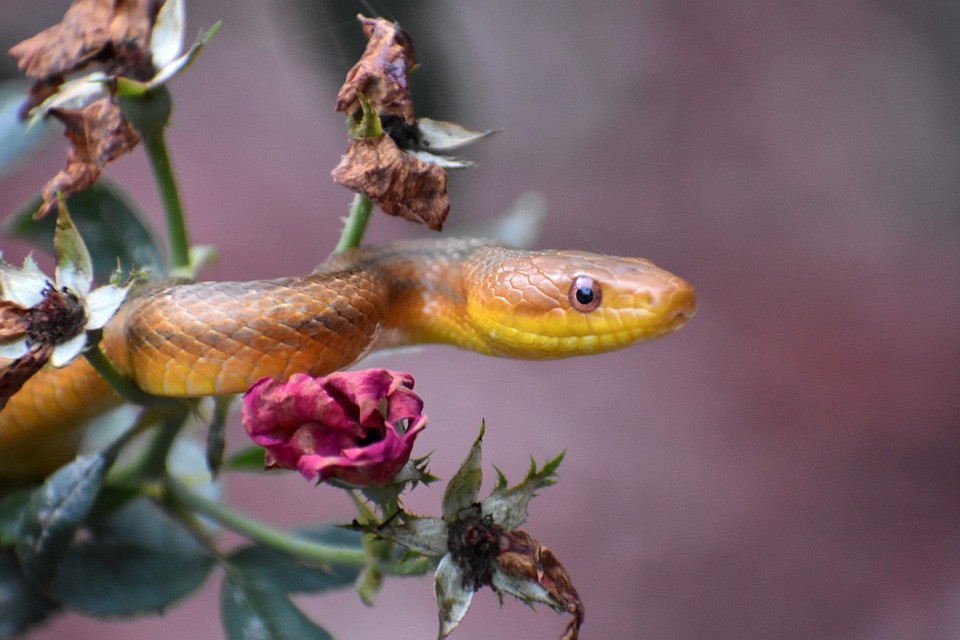 Rat snakes are medium-sized snakes with good adaptability. They like to burrow and are great climbers and can be found in a variety of habitats, urban woodlots, farmlands, wetlands, forests, and grassy areas with trees to climb. They occasionally find themselves in human residencies and upper levels of floors, where they hunt for rats and other pests.

Rat snakes have a tendency to freeze when scared instead of flee, and if threatened further will release a foul-smelling musk. Because they are constrictors and catch and kill their prey through suffocation, they have relatively weak bites that they only use when threatened and driven into a corner. 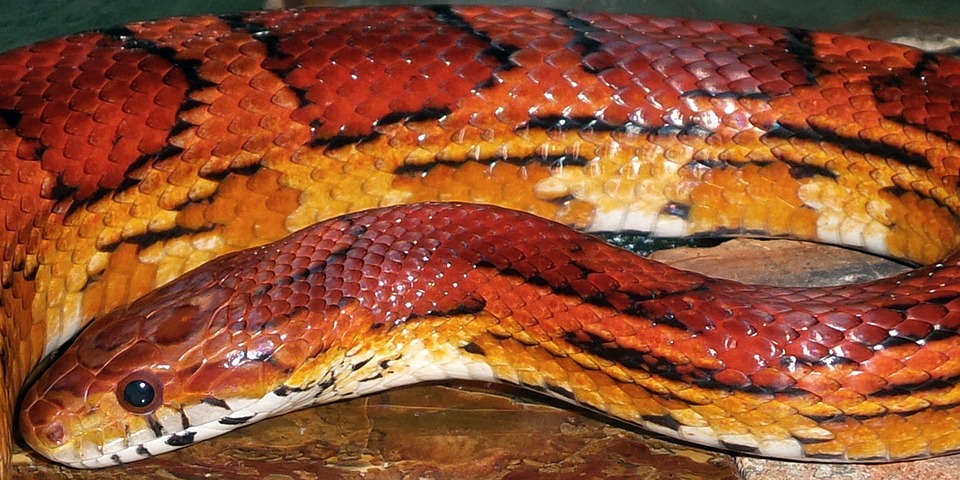 Corn snakes are one of the most popular species of snakes to keep as pets. They are found in the wild in the Southeastern United States, often in wooded areas and forest with lots of trees and overgrown grass. They have been known to sometimes climb elevated areas, even mountainous areas high above sea level.

As pets, captive corn snakes are known for typically tolerating being handled for long periods of time. They are calm, a good medium size, and relatively easy to care for, not to mention they have been selectively bred to have many different kinds of beautiful color morphs. In the wild, they will avoid humans and only attack when cornered like most other snakes.

They grow to about 2-5.9 feet in length. Captive Corn Snakes have a wide variety of color morphs, but the most common one witnessed in the wild are orange with black-lined saddle markings down their backs. They resemble copperheads at first glance, but are completely non-venomous. 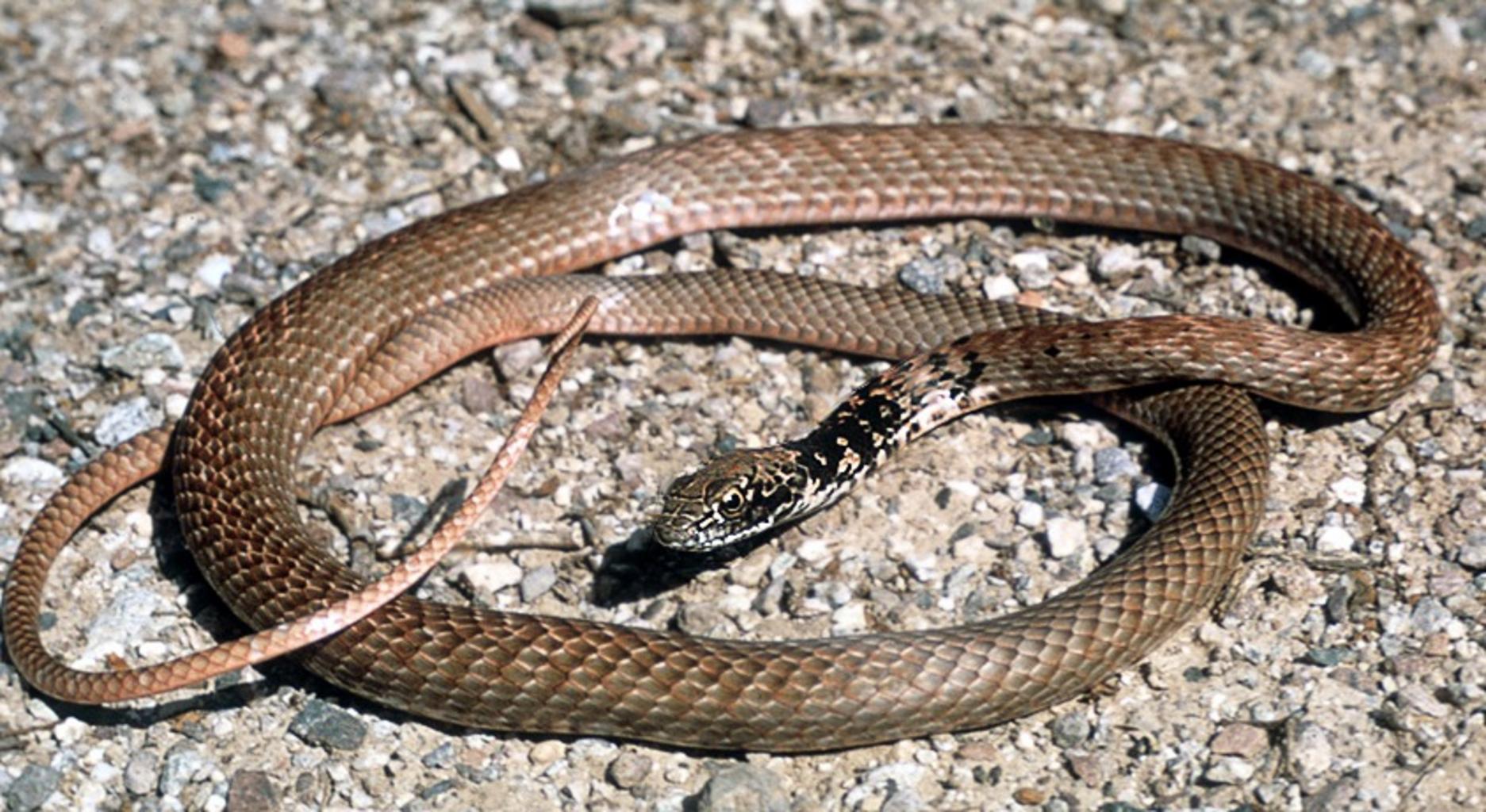 Coachwhips are long, very fast snakes that are found throughout the Southern United States. They prefer to live in open areas with sandy soil like open pine forests and prairies where they can camouflage themselves against dirt and leaf litter. In Florida, many of them can be found in sandhills and sand dune habitats.

They are very curious and quick snakes that tend to be sensitive to any perceived danger. While they enjoy exploring using their good eyesight, they will bolt if provocated at speeds up to 4 miles per hour. Their powerful jaws are usually used to catch prey, but they will not hesitate to strike at humans or other threats when cornered. These bites are painful, but otherwise harmless.

These snakes are named for their pattern of brown scales that make them appear to be braided. Coachwhips are usually 50-72 inches long and have long, thin bodies with small heads and large eyes. 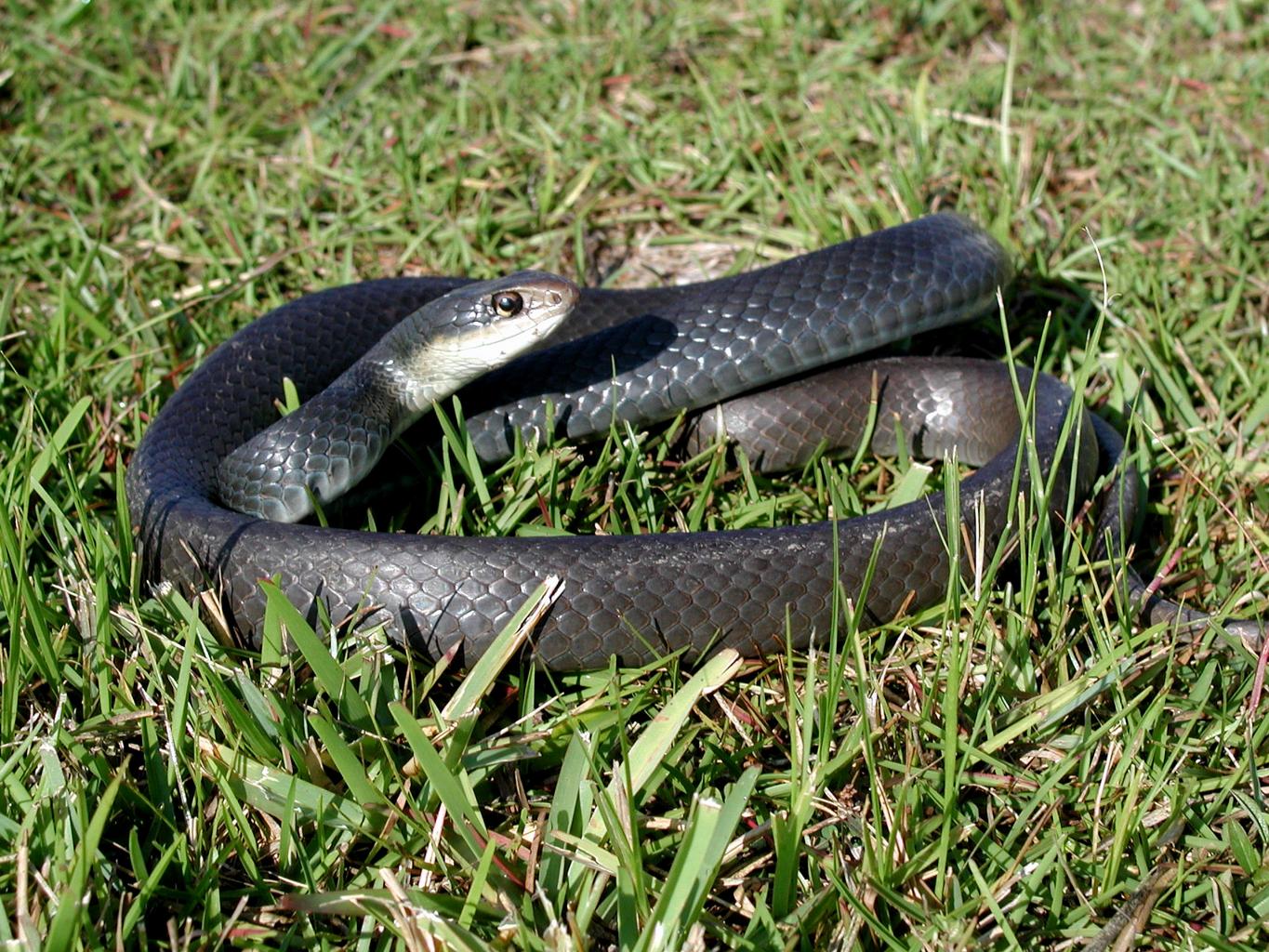 As the name would suggest, Racers are very lithe and fast snakes found throughout Florida in open, grassland areas or anywhere near a water source. They are one of the most common snakes found in residential Florida areas. They’re most often found on the ground, but some subspecies are also excellent tree climbers and will eat birds and eggs when they can.

They are very inquisitive snakes and can often be seen raising their heads above the grass to look at what is around them using their excellent vision. If they encounter humans, they will usually flee the interaction, but will fight aggressively if cornered- hissing, thrashing, releasing foul-smelling musk, and biting as much as possible, making them extremely difficult to handle, even for experienced handlers.

They are typically 20-60 inches long and are very slender. Juveniles will sometimes have dark, blotchy patterns against lighter backgrounds, but these colors typically fade into a uniform blue, green, black, brown, tan, or red, depending on the species. Banded Water Snakes are common in the south, but the subspecies you’ll most likely find in Florida are the Florida Banded Water Snakes. These mostly aquatic snakes can be found near shallow areas of freshwater like marshes, swamps, and ponds, and can often be found lost in residential areas that have encroached upon their habitat.

All of Florida’s fully aquatic water snakes are non-venomous and generally not aggressive, but will bite or release a foul, musky odor to defend themselves if they are cornered or accidentally stepped on.

They are heavy and stout snakes that usually reach 22-42 inches in length. Juveniles are usually gray, yellow, brown, or reddish-brown with large, broad red, black, or brown crossbands down their backs. Their colors darken with age and can eventually give the snakes a solid black or dark brown appearance.

Banded water snakes are often confused with the venomous Cottonmouth vipers, but can be distinguished by their round pupils, lack of facial pits, and brow ridges. 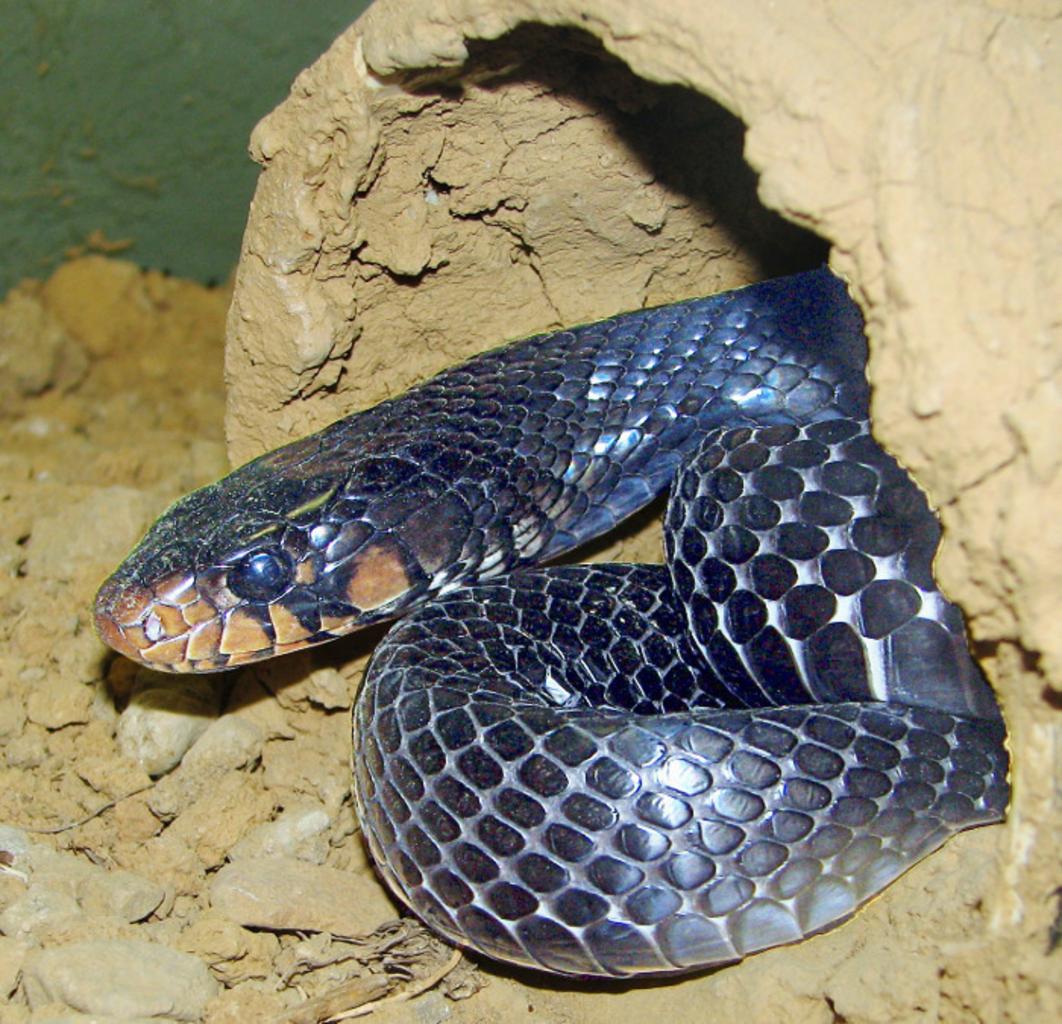 These snakes are the longest native snake species in North America. They prefer flatwoods and dry, sandy areas, especially Florida’s sandhill habitats. Due to human development and destruction of the gopher and tortoise holes these snakes use to move, they are currently threatened and legally protected, though that doesn’t stop them from being seen as desirable pets by collectors entranced with their colors and docile natures.

They are not aggressive and typically only bite humans in defense. The bites are painful, but generally not harmful. Indigo snakes hunt using their powerful jaws and large size to overpower their prey, which can include rattlesnakes. Due to their protected status, they cannot legally be handled without a permit, so avoiding contact and leaving their habitats untouched is important to help preserve their species.

Indigo Snakes are very beautiful snakes. Their bodies are usually uniform blue-black colored, with some individuals having red-orange colors on their mouth and throats. Their smooth, glossy scales appear iridescent in bright light. They typically grow from 3.9 to 7.7 feet long, but specimens have been found that are over 9 feet long. 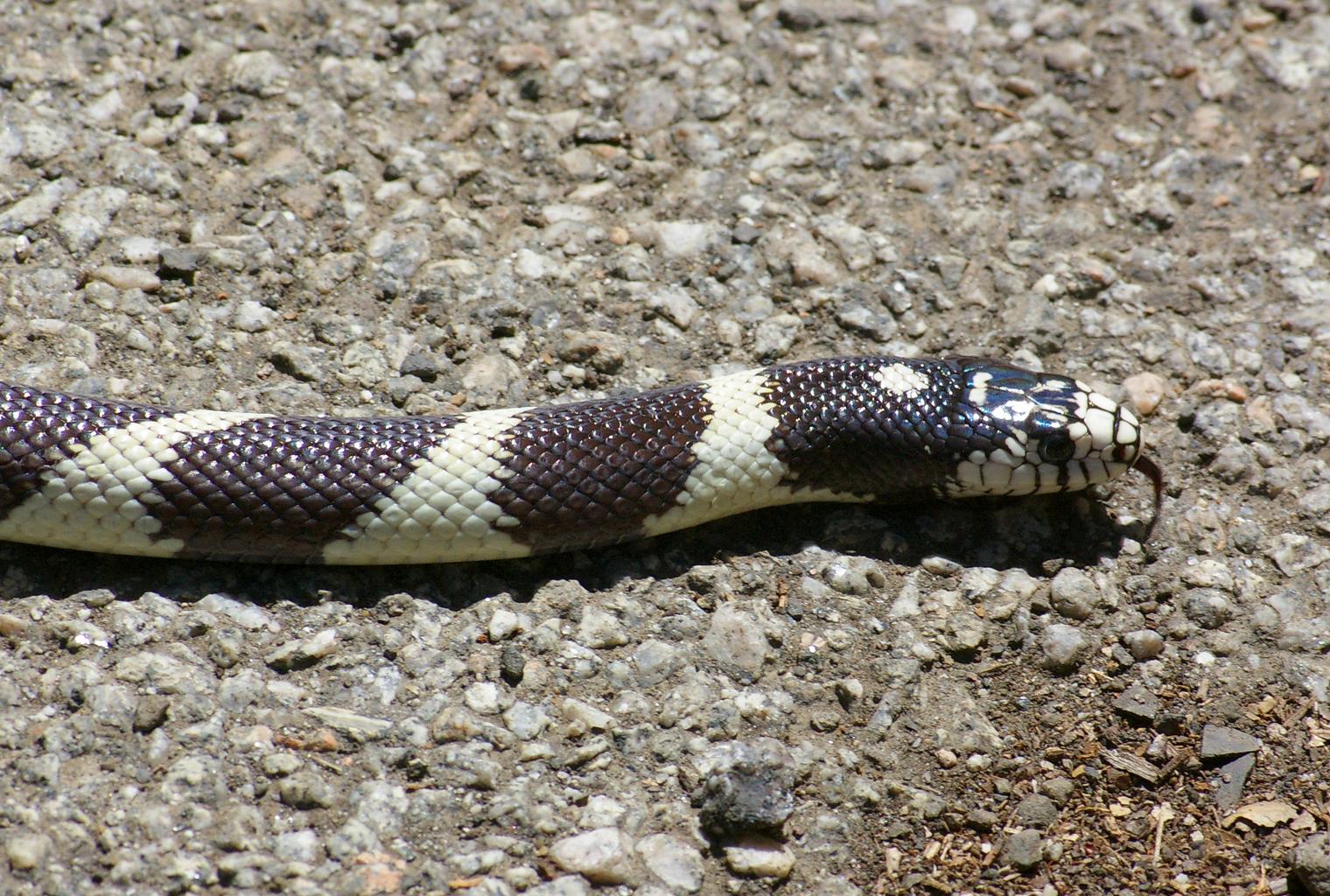 These snakes are common throughout the United States and Mexico and have nine separate subspecies. Kingsnakes can live in many different kinds of habitats, but generally prefer grassy open areas. They kill their prey using constriction instead of biting, and are especially unique due to their habit of sometimes eating other snakes, even venomous rattlesnakes, because they are immune to several types of snake venom.

They are docile and popular as pets and are relatively harmless to humans, though wild ones have been known to sometimes strike only when cornered. Because they are constrictors, their bites are weaker than other snakes and are generally harmless besides some pain and bleeding. If encountered in the wild, they should be left alone.

Their coloration depends on the subspecies, but the most well-known colors are the red, black, and yellow striations of the Mountain Kingsnakes. Florida species are more likely to black or brown with yellow or tan rings. Kingsnakes are slender and generally medium sized snakes, usually reaching up to 40 inches in length, but they can grow longer in rare cases.

These large snakes are not native to Florida. They are an extremely invasive species that has had a devastating impact on Florida ecosystems ever since the exotic pet boom of the 1980s. Pet owners would release their snakes once they grew too big to manage, but the issue was greatly magnified when, in 1992, category 5 Hurricane Andrew destroyed a private python breeding facility near the Everglades, releasing the snakes of the facilities into the nearby swamps and parks. Since then, it has been a fight to try and take back the ecosystems from this incredibly invasive species.

Their ecological impact and damage to native species is so severe that anyone who catches or encounters a wild Burmese Python is extremely encouraged to humanely kill the animal in order to try and prevent the spread of the species. They are generally not aggressive towards humans due to adult humans’ stature, but should still be given a wide berth if encountered and should not be approached.

Burmese Pythons are one of the largest species of snakes. They typically grow to up to 16 feet long and have heavy, thick bodies they use to constrict and kill their prey. They can be recognized by their size and the large black-bordered brown splotches down their backs.