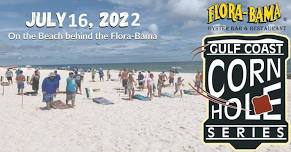 Cornhole on the beach! It doesn’t get much better than that!

The Gulf Coast Cornhole Series consists of numerous qualifying tournaments and a final Championship Tournament spanning the Gulf Coast from Perdido Key to Okaloosa Island between March and September.