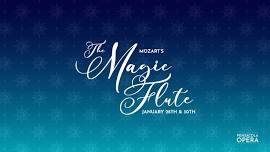 Premiered during the Age of Enlightenment, The Magic Flute transports us on a mystical journey filled with genies, spirits, and the hilarious antics of a creature who is half man and half bird! The classic elegance of Mozart’s music enthralls us as a young man discovers his humanity during his quest for the truth.