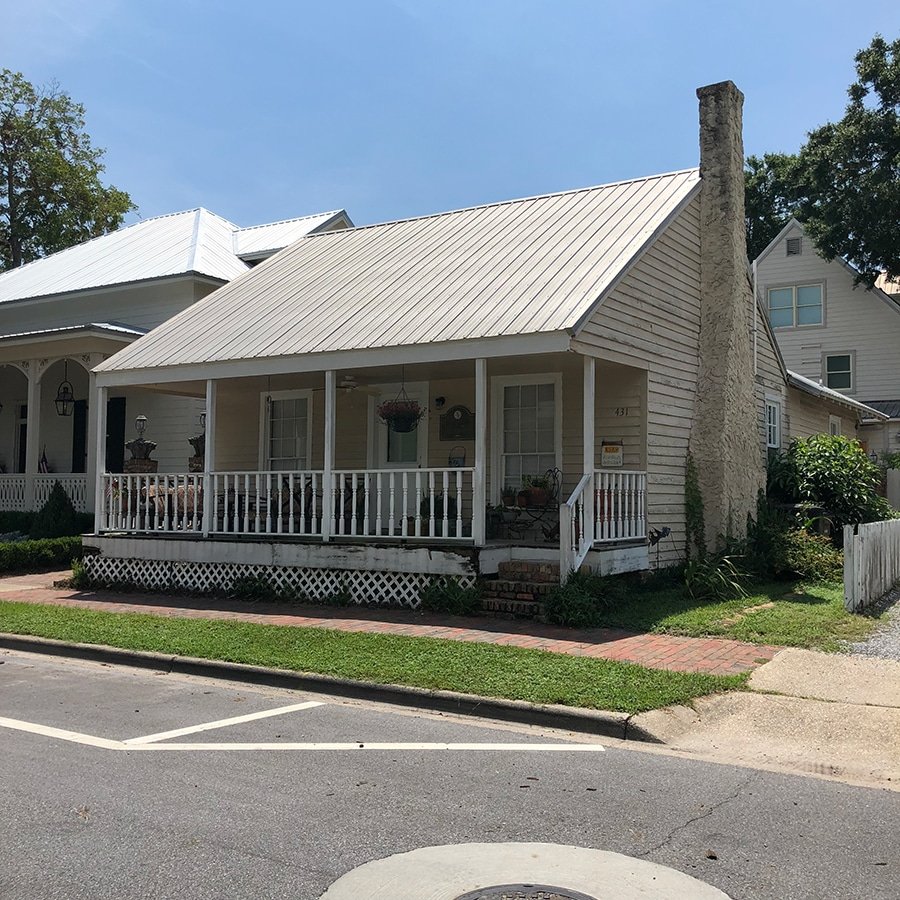 The history of Pensacola is rich and enduring, indeed. Known as the “City of Five Flags,” Pensacola has been under the control of five nations since its inception in 1559–Spain, France, England, the Confederacy, and the United States. Consequently, various architectural influences are evident in much of Pensacola’s historic architecture. During the Third Spanish Period (1781-1821), the Isaac Wright House–a modest cottage that has long piqued my interest–was constructed at what is now 431 E. Zaragoza St. in historic downtown Pensacola.

This quaint cottage, as one might expect from a structure initially built approximately 200 years ago, is somewhat shrouded in mystery. A plaque posted next to the front door indicates the house was built in the 1790s. However, there has been contention about the interpretation of historical documents, land deeds, and court records. Leora “Lee” Sutton (1917-2018), prolific Pensacola historian, conducted research on the Isaac Wright House and exposed key discrepancies. Sutton’s research revealed that—contrary to information provided in the Historic American Buildings Survey (HABS) regarding Pensacola’s purported oldest remaining building, which indicates the house located at 431 E. Zaragoza Street is situated on Lot 21 and is associated with Carlos Baron—the Isaac Wright House is in fact located on Lot 23, and no discernable historical records indicate an association with the aforementioned Baron.

During the early 19th century, land deeds were not required to be recorded at the Escambia County Court House, making historic architectural research in Pensacola a bit difficult. Miss Sutton, however, worked closely with Herschel Richards, who purchased the Isaac Wright House in 1944, to fill in the gaps created by inadequate land deed record keeping. Mr. Richards possessed deeds dating back to 1846, when Don Francisco Moreno (1792-1882)–prominent Pensacola banker, politician, and businessman–owned the cottage. Through her efforts, Sutton was able to recognize an apparent error in HABS records—records that associated this iconic property with Lot 21 and a man named Carlos Baron.

Without rehashing the long list of property ownership, I will say this: even a cursory glance of historical documentation related to the Isaac Wright House will reveal that being an historian is much like being a detective. History is not always as it seems. What is clear may not be true. Historians must piece together artifacts much like a puzzle, and, in the same vein, the final product cannot be contrived—the pieces cannot be forced. The mysteries of history are what fascinate me and going to the archives and getting my hands dirty, so to speak, is exciting. Give it a try; you may very well fall in love with history as well.

Written By Kathlene Rushing
Posted on June 14, 2021November 4, 2021
Kathlene Rushing is a prolific writer with a passion for the Gulf Coast. Having lived on the coast for more than 10 years, she has a deep understanding of the culture and atmosphere that allows her to speak openly about all that Pensacola has to offer.
Author's Website: https://webnetmobilesites.com